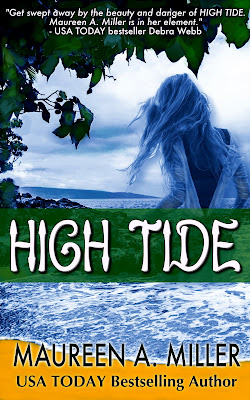 A couple locked in a struggle to protect the coast...and their lives.

U.S. Geological Survey expert, Nick McCord, cannot account for the strange phenomenons plaguing the Windward coast of Oahu.  Breaking waves on a windless shore. Dead fish washing up on the sand. The only viable culprit for these anomalies is the new housing development, Manale Palms, and its attractive contractor, Briana Holt. Try as he might to find blame with Briana and her site, the truth remains a mystery.

Briana Holt portrays herself to the outside world as a woman in charge. In reality she is burdened with insecurities, and one of those insecurities is over six-feet tall. Intent on defending her property from Nick's suspicions, she starts to dig deep into the peculiar episodes along the coast.

Nick and Briana's mutual curiosity makes them allies, and their mutual attraction makes them lovers. Now, as they narrow in on the source of the mystery, they find themselves in a struggle to protect the coast...and their lives.
NOW FREE!

Excerpt:
If only she could take her shoes off. Granted the heels were low enough, practical for the site survey she was about to conduct, but Briana Holt wanted to ditch the business veneer and delve her toes in the sand.
Anxious, she shoved her sunglasses atop her head and studied the construction from this perspective. Some of the houses were already up, and several lots were still being excavated. The project seemed to be going off without a hitch.
So, why the nerves?
Briana let the beach wash away the stress. Turning her back on the development, she scanned the shoreline with a hand over her eyes.
A herd of children charged the surf, their peals of laughter louder than the flock of seagulls eyeing a nearby picnic. A couple strolled hand in hand in the distance, their silhouette a virtual Hawaiian postcard. And a man stooped near the water’s edge, combing his fingers through the sand in search of shells.
Certain that she was far enough from view, Briana reached down and yanked her sandals off. With them hooked on her finger, she took a few steps closer to the ocean and planned out her strategy for the afternoon.
Concentrating on business matters, Briana was nonetheless fascinated by the man that crouched where water met land. When he gradually stood erect, his height climbed past six feet. It was impossible not to stare at the long legs in khaki trousers, and the crisp white shirt with sleeves rolled up over bronzed forearms. Her trek rose to short, dark hair whipped frenetically by the wind. She watched the fluid, but powerful way his hand reached up to massage the back of his neck, and wondered what had him so engrossed.
It was odd to see someone obviously dressed for work out digging for seashells. But, then again, glancing down at her own flowery ensemble—maybe he wasn’t the only one to seek escape.
The profile exuded strength, yet his stance suggested indecision. Entranced, Briana advanced for a closer glimpse, surprised to hear him talking to himself. She nearly tumbled backwards as he spun around and pinned her with deep brown eyes, shadowed wells that enticed her to dive in.
“I didn’t mean to scare you.”
His voice was a soft rumble like the surf, emitted from a mouth that curled up appealingly at the side.
Briana stooped to retrieve the sandal she just dropped. She rose and sought composure. “You didn’t. I—I was just wondering who you were talking to.”
He shook his head and reached for the back of his neck again.
“Myself. A somewhat enlightening conversation, but it was interrupted by your shadow.” Dark eyes swept the length of her. “Curiosity got the best of me. I had to see who you were.”
Certainly having never succumbed to pure attraction as a means for frivolous banter, Briana felt awkward, compelled to run. She glanced over her shoulder, surprised to discover how far she had strayed from the development.
“Lunch?”
Startled, Briana realized that he was still talking to her. She turned back so abruptly, her tawny locks lashed her face. Drawing them away, she managed to say, “Excuse me?”
“Are you out here for lunch?”
“More or less. And you? You don’t look like you’re out sunning yourself.”
Oh God. She sounded like a complete fool.
Briana couldn’t resist a glimpse of the healthy tan at the collar of his white shirt. When he followed her gaze, she wished the dark lenses were covering her eyes instead of resting uselessly atop her head. Still, they could have done nothing to conceal her flushed cheeks.
“I’m working.” His low voice was intoxicating, his dusky glance an equal stimulant as it swept her body.
An eyebrow elevated in frank approval of the whimsical floral outfit. “And you? When I turned around I expected to find someone asking for their beach ball, not—”
Not what, Briana wondered, watching his lips.